Therapy dogs spread happiness, love, and cheer to people who otherwise might be lonely, sad or slow to heal. This is the journey of Cayman, a longhair miniature dachshund and his journey and experiences visiting becoming a therapy dog.

Did you know that pet visits often spark good memories of a person's own pets? Dogs often can reach people and children who have withdrawn from the world. It's been suggested by science that petting a dog can lower blood pressure, reduce anxiety and stress, and promote healing.

Wow- can you believe its been four months since I last blogged here?! I guess family life and work gets in the way so here is an update:

1. Cayman completed his Basic Dog Obedience Training thru the Dog Obedience Club of Lee County on February 11. He was issued not only a certificate of completion but also a 2nd place ribbon which he was awarded for being the 2nd most improved dog in the class! Both were framed and we are please to display them next to his Petco Puppy Education completion certificate.

2. Cayman is definitely growing into one handsome boy. He has gotten gorgeous plumage (not really sure what else to call it) on his tail so when his tail is held high, its a beautiful flag of long gorgeous fur.

3. Cayman completed a Canine Good Citizen test today and was awarded certification. He is now CGC Certified!!!!!! I am eager to get my certificate and have it framed to add to his awards. I might even go a step up and order the rosette/ribbon too!

Other than that, the training has been less intense as has the therapy visits. I am enrolling in school myself-I registered at Edison State College to go for an Associates in Business Management so if it had to come between education for myself to advance in my career or continuing education for my dog; sorry but momma's got put food on the table so that means I come first in schooling.

I do continue to want to work with him to pursue Rally and furthering his obedience training but for now, Cayman is just another fur-baby, content in being loved and adored my his family. So those that have been missing hearing about him, hopefully I can be a better blogger and keep his site current. So that's that! We're happy to be back in the blog-o-sphere!
Posted by Unknown at 9:34 PM 13 comments:

Thanks to all that sent e-cards and holiday greeting cards for this years DWB Card exchange. I suppose I was not prepared for the overwelming number to hit my email and mail box! It would take hours to post everyone I received! So one great big thank you to everyone, posted and unposted, that particated!

Wow, They Start to Pile Up Don't They?!

The cards and e-cards continue....

Thanks to the following:

Asta from NY of http://astasworld.blogspot.com sent this one: 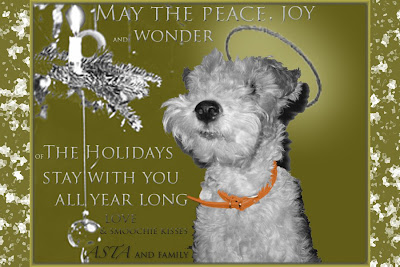 Kismet the dachshund of www.kismetbarks.com sent an animated video you can see by clicking here

George of MI at http://puddinpup.blogspot.com sent this: 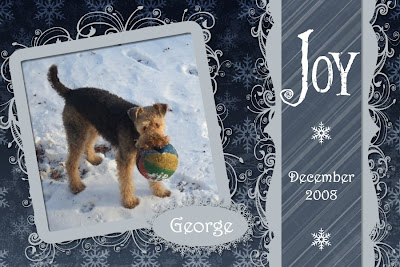 Jack and Abby of Washington at http://abbyandjack.blogspot.com sent this one: 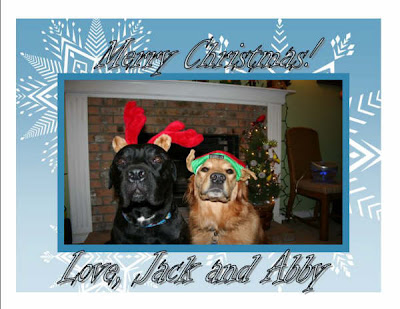 Quincy of Canada at http://betapuppy.blogpsot.com sent this: 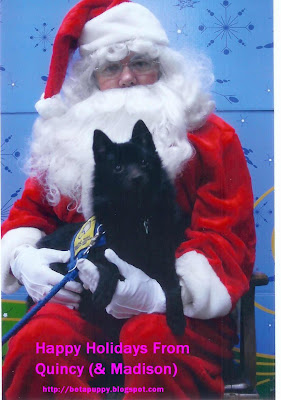 Kingsley and Robin from the Netherlands of www.kingsleydog.com sent this one: 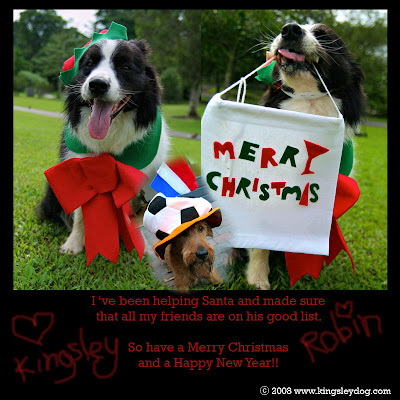 And another dachshund, Ruby the mini dachshund in Canada of www.agenuineruby.blogspot.com sent this: 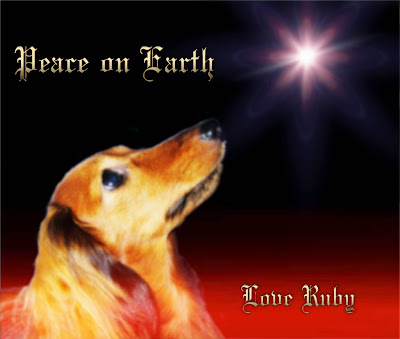 Bailey, Baxter, Brody, and Benson of WA sent a really cute animated e-card that you can see by clicking here

And those are just the more recent e-cards! I still got a bunch of snail-mail greetings too from:

Murphey and Reilly of TX at http://thelifeofmurphey.blogspot.com

Arabella of MN at www.arabellathedog.wordpress.com

and from Sophie, Dixie, and Harley of IN at http://pugandbugg.blogspot.com

Just when I thought I cleared out my mailbox of all the wonderful snail mail holiday cards, I found my email box was just as full!

Comet and BLU of AZ at http://spitzwits.blogspot.com 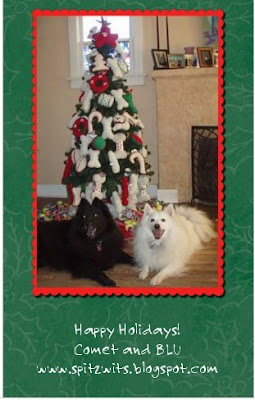 Noah, Willow, Tess, and Lucy from Australia at http://leuradales.blogspot.com 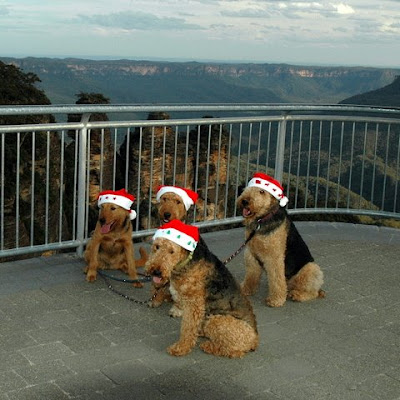 And Dobby of NC sent us one. You can visit him at http://ChihuahuaPost.blogspot.com 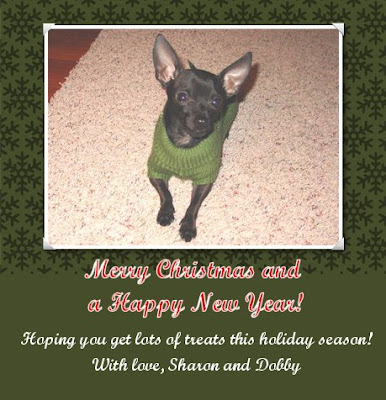 And one from Fred of TX at http://bichonking.blogspot.com 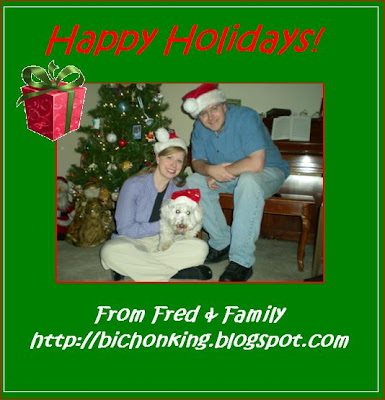 And a very interesting one from the Phillippines from Sweepy and friends of http://sweepyinheaven.blogspot.com

A Christmas Story by Sweepy

who met on the night of the full moon and vowed their undying love to each other . . .

They were inseparable and lived quietly and contentedly together. . .

In a short time, the female hound found herself pregnant and her mate became protective of her . . .

However, they lived in a land ruled by people. And the ruler of this land is a cruel King who hates animals.

The King saw a lot of dogs running around the land so the King gave an order for all puppies to be killed,

and for all dogs NOT to mate so there won’t be any more puppies!

“Ha! That should STOP the spread of their kind!” the King laughed.

The Hounds joined the wild exodus to escape and deliver their first puppy in an unknown and possibly dangerous land.

In the wild, the Hounds were met by many animals like them who have escaped the wrath of the King.

There was a big exodus of animals and there was no place for the Hounds in the noisy and unfamiliar wilderness.

But the female Hound was about to give birth so the male Hound looked to the skies in prayer and found a Star!

and gave them shelter. Seeing that the female Hound was pregnant, the Lady made a comfortable bed

for the Hounds in her small house and like the male Hound looked to the sky for prayers.

Hearing the prayers from the land below, the lone Star in the sky became bright and its light focused

on the female Hound who gave birth to a single puppy!

The light helped the female Hound to have a painless delivery! It also helped the Lady eased her lonely heart.

and the Lady who decided to adopt each other and they became a family!

And on that special night in December, as the winds howled, and the birds chirped happily, a bright lone Star

twinkled merrily as it witnessed the loving bond that surrounded a Hounds family once upon a time . . .!!!!

Epilogue: I must tell you my dearest friends that this could be a real story.

I knew that the puppy later grew up as a SuperDog ;-)

who barked loudly at clueless and cruel peeps irregardless if they are Kings!

and quiet homes lighted by the DWB Star and kind Keepers.

. . . And with that, we wish you and your family good health, warm hugs and kisses, yummy treats,

exciting play and adventures and may you have plenty of Love in this Holiday Season!!!

Whew! I have been so busy putting up our Christmas tree, working, taking care of my family and pets, getting some Christmas shopping done, and reading up on therapy dog work that I haven't had a moment to post all the wonderful DWB Holiday cards I have received lately!

A gorgeous handmade card came from Lenny of IN at http://wirewise.blogspot.com

And one from Tippy the dachshund of IN as well at http://lifeaccordingtotippy.blogspot.com

Then there is one from The Zoo Crew of NM at http://zoocrew5.blogspot.com

And a very pretty one from a golden retriever named Charlie from OR of http://charliegolden.blogspot.com

Then from all the way from Australia from Opy and Charlie of http://originalgruffpuppy.blogspot.com

And one of my favorites was a handmade card from Shelly and Tommy of SC of http://www.mydogshavefleas.com/fleasblog

Then there is one from Keeley of WI of http://keeleypup.blogspot.com

And Mango and Dexter sent us one from MA of http://mangosgreatadventures.blogspot.com

And last but not least, one from Deefor and Arrow of CO at http://deefor-denverdog.blogspot.com

Here is one from a very pretty dachshund, Mona, from TX. Her blog is: http://justustexasdachsies.blogspot.com 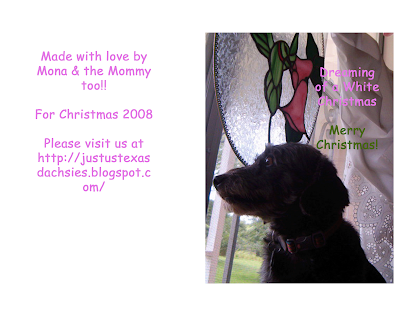 And Hercules from KS at http://keepyourtogaon.blogspot.com sent us this one: 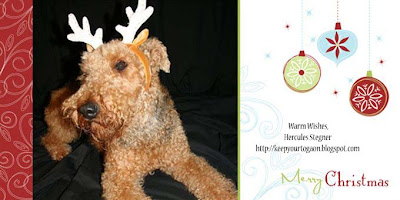 Then there is this one from Beckett from AL of http://adognamedbeckett.blogspot.com : 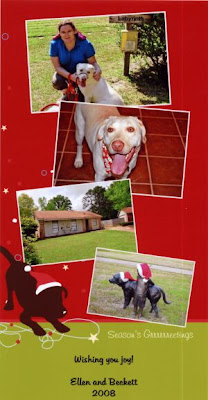 And all the way from Malaysia is this e-card from Ben and Twinkle of www.colliebenjamin.blogspot.com 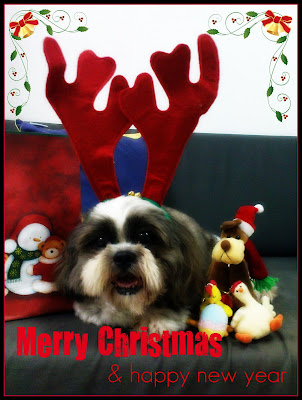 ALL ABOUT MY DOG SURVEY

Titles Held: working as a therapy dog with PAWS Ministry; aiming on training for CGC title and novice rally-o title

Favorite Things to Do: follow me all through the house- he is my shadow; wrestle with Roxy and Zoey; romp through the grass; cuddle; give kisses and high-fives

Dislikes: baths, nail trims and having his teeth brushed; being stuck out on the patio looking in through the French door windows when I am in plain view in the house

Likes: to chew up my daughter's pacifiers; sleeping in my bed; going to doggy-park; doing tricks for treats; going for a car ride or walk

Interesting Tidbits: has a bedtime of 8 pm, on the dot, and wakes me up every morning at 5:30 am, whether I am working or not, with a wet and sloppy kiss; he will sit on your feet if you are in the kitchen preparing food- its like he is making sure to keep you as close as possible...it can be a little annoying at times but I still find it very endearing

Get this widget!
Visit the Widget Gallery

"How God Made Dachshunds"


"How God Made Dachshunds"
written by:

God made a little dachsie

to brighten up our day.

He took a bit of sunshine,

and rolled it up in a sausage shape

just right for a hug,

with bright eyes full of mischief

set in its little mug.

With little paws a pattering,

to take it here and there-

and a cold wet nose-but then He thought,

"Oh, what about the hair?

Shall I make it long and silky,

or wiry, that's so sweet, or make it simple, and have it smooth

and satiny and neat?

And what about the color-

how can I pick just one?

Shall it be black, or red or brown

or dappled, just for fun?"

He pondered while He made the world,

And all creatures great and small-

And then the answer came to Him-

So remember that a dachshund

is special, from above His coat of many colors